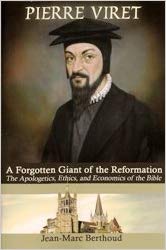 This book bears with it a grand subject: the historical and literary resurrection of one of the major figures of the Reformation, the long forgotten Reformer of French-speaking Switzerland, Pierre Viret (1511-1571).

This book bears with it a grand subject: the historical and literary resurrection of one of the major figures of the Reformation, the long forgotten Reformer of French-speaking Switzerland, Pierre Viret (1511-1571). Viret was a life-long companion of the better known figures of Farel and John Calvin. After his studies in Paris Viret, amid the bonfires of first martyrs of the French Reformation, was won to the renewed Evangelical Faith. Before the coming of John Calvin, he labored with Farel to establish the Reformation in Geneva. In Lausanne he founded the first Reformed academy, later to be the model of the Genevan seminary. In 1559 he was exiled by the Bernese sovereign over Vaud for his defense of the local Church’s disciplinary autonomy from the State. Viret, a man of great mildness and persistence – was called « the Angel of the Reformation » – he was in his time a renowned preacher, evangelist and theologian. A prolific author, his abilities in the fields of ethics, apologetics and symbolic and pastoral theology puts him in company of the great Reformers. His massive Christian Instruction in the Doctrine of the Law and the Gospel contains the finest exposition of the Ten Commandments produced by the Reformation. His apologetics based on the authority of God’s Word on every aspect of creation and the certitude that the meaning of all reality was given by God and revealed in his written and incarnate Word, leads his writings to have an incomparable freshness and present applicability. His careful application of God’s Law to the economic realities of his time sheds light even on the financial issues that trouble ours. The present renewal of interest in Pierre Viret’s labors for the advancement of the Kingdom of God comes indeed at its proper time!